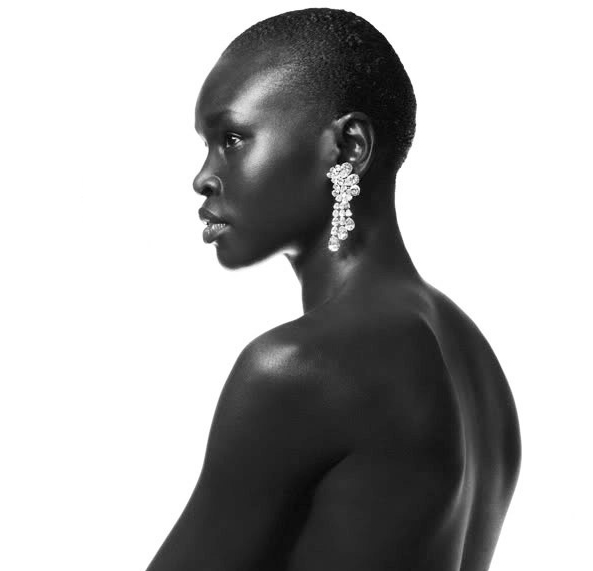 Alek Wek is one of the world's foremost supermodels, widely regarded for breaking countless stereotypes and boundaries, not only for women of color, but women in general. Alek first broke onto the scene with a cameo in Tina Turner’s “Golden Eye” music video for James Bond in 1995. “I was just a little girl, and one day after school--this was after my family fled South Sudan and moved to London--a scout asked me if I wanted to model. I thought, "ME...model? No way!" I kind of brushed her off because I was focused on school at London College of Fashion. Anyway, I gave her my number on a whim, and she actually called. This Tina Turner video was one of my very first jobs and I thought it was pretty fabulous!" In 1996, Wek made another cameo in Janet Jackson’s “Got Til It’s Gone” music video featuring Q-Tip. This was the second music video she’d filmed in two years. Alek came to New York from London in 1996 and went on seventeen appointments a day for about six weeks. The outcome of all those appointments? An editorial shoot with Steven Meisel for Vogue Italia! 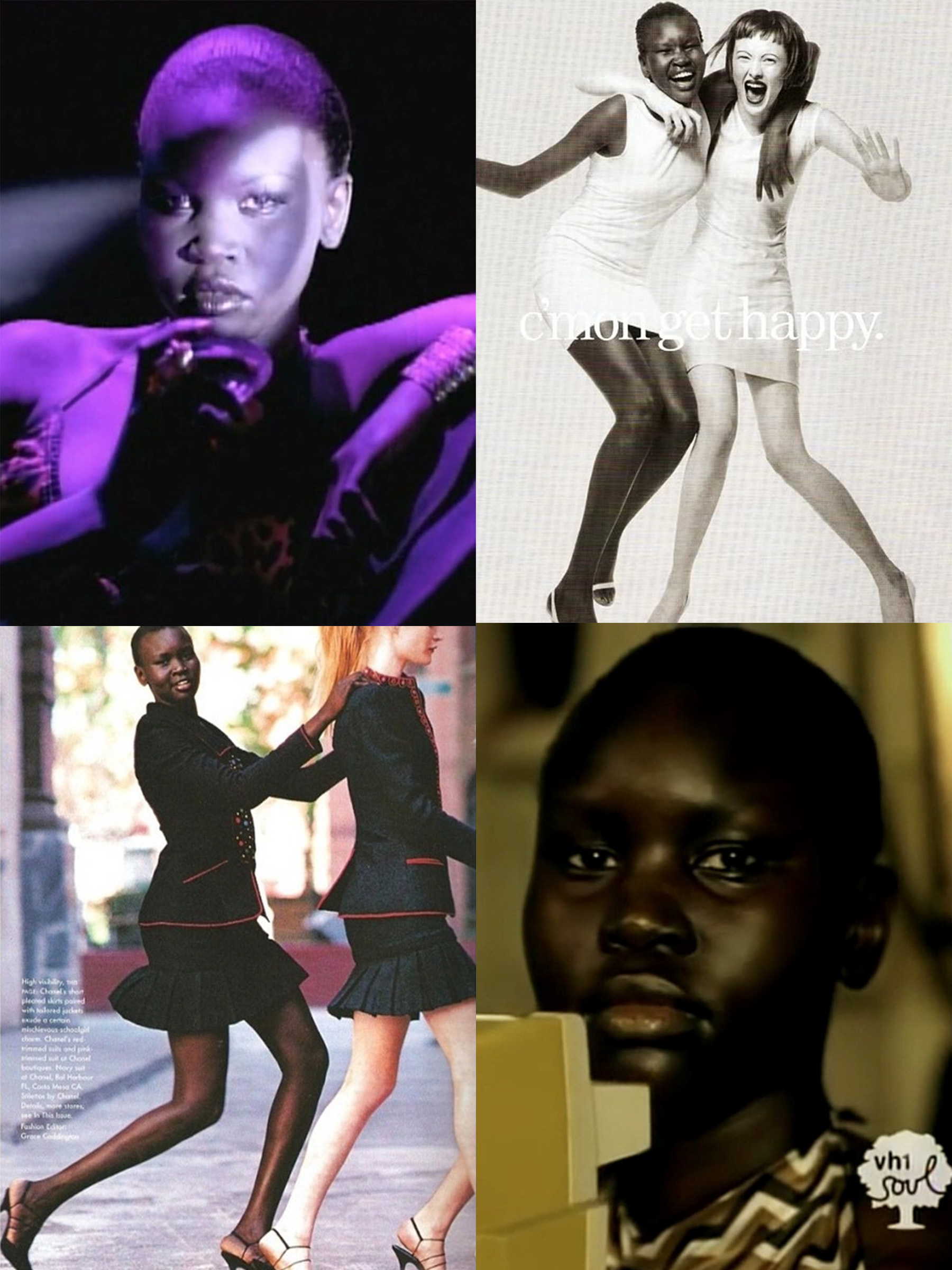 During the Spring 1997 season, Ralph Lauren tasked the unknown Alek Wek, then 19 years old, with opening and closing his "Maasai"-themed collection shown at New York Fashion Week. In her own words: "I didn't think anything of it. It was one of my first big shows, if not the first, and everyone kept asking me how it felt because I was so "exotic" and "different." I told them 'FABULOUS' because it was a great experience, but I didn't see myself as different or exotic. I'm just Alek, and besides, all women, whether blonde or brunette, are different and beautiful!" 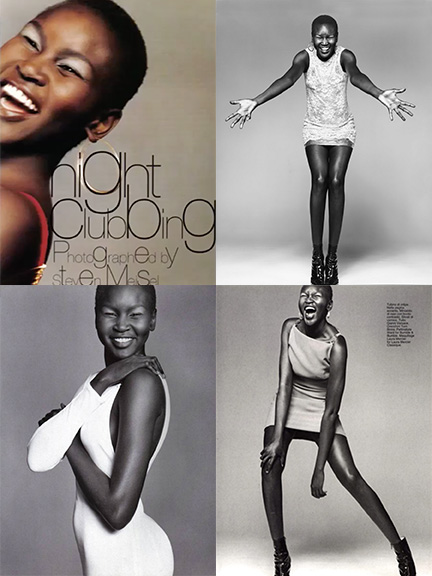 From Elle to Oprah 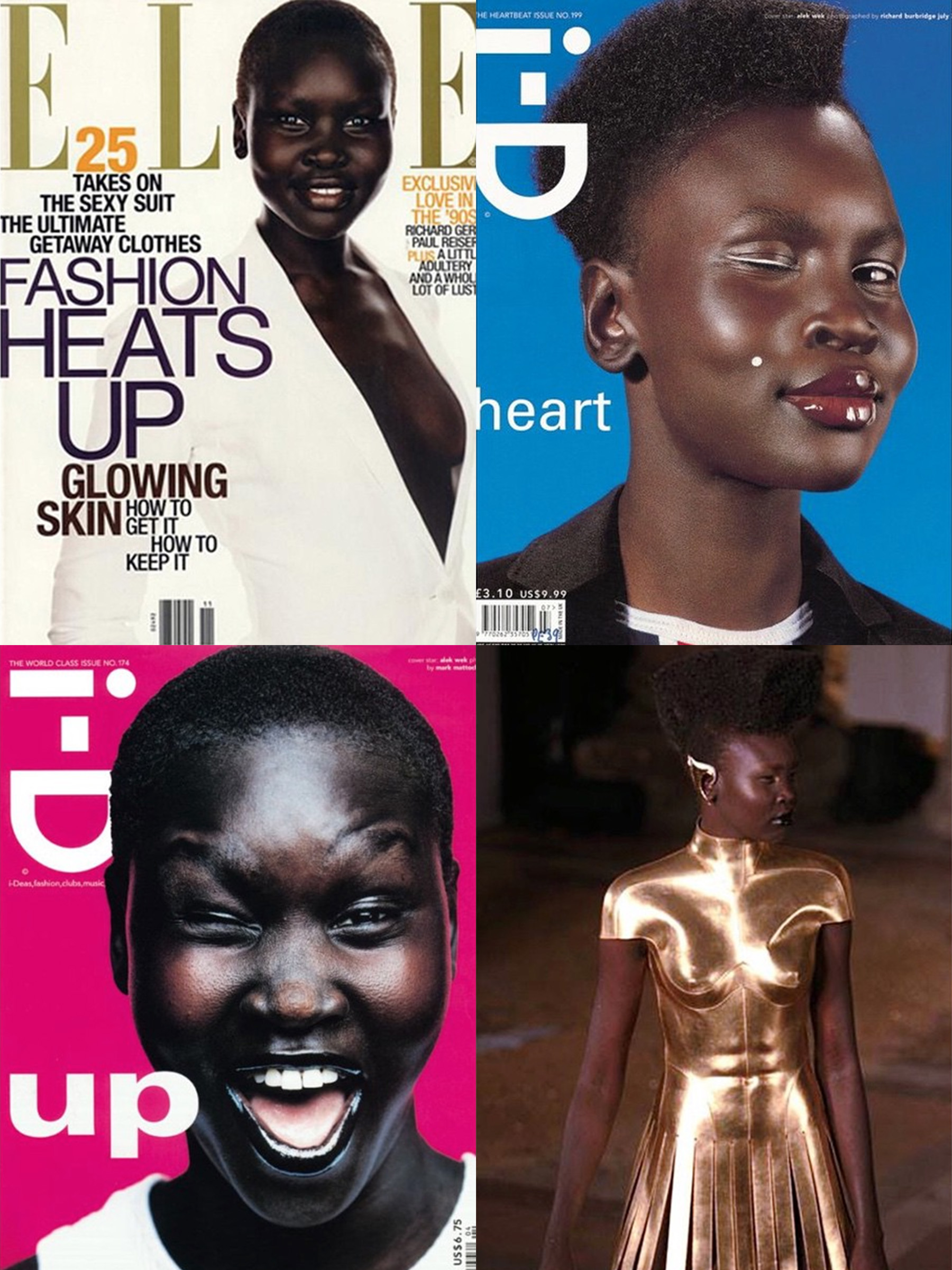 For her very first appearance in American Vogue in 1997 shot by Aruthru Elgort and styled by Grace Coddington, Alek and her fellow PYT's wore head to toe Chanel. In her own words: "Those skirts we so flippy and flirty and fun! We had a blast on this shoot, it was all very new to me, but it felt good. And Arthur is one of the sweetest men in the world!" Some of Alek’s favorite images ever are her shots for the Issey Miyake Spring 1997 campaign shot with the legendary Irving Penn. In a move that shocked the entire fashion industry and consumer-driven beauty community at large, Alek graced the cover of Elle magazine in 1997, the first African model to do so in the publication's history. The event garnered significant media attention, and Alek even appeared on The Oprah Winfrey Show! Winfrey praised Wek: "If you were on the cover of a magazine when I was growing up, I would have had a different concept of who I was." In her own words: "Whooo...that suit was BAAAD! Everyone was making a big deal out of the color of my skin, but I was making a big deal about how good I looked in that suit!" Shortly after this ground-breaking cover, Alek was named Model of the Year by MTV and Model of the Decade by iD Magazine.

One of her most famous images is her Pirelli Calendar 1999 shoot with Herb Ritts. "This is one of the definitive shots of my career taken by the amazing Herb Ritts. He was always so wonderful to work with! The stylist on this shoot wanted to put me a latex catsuit, but it was so tight and it hurt so much to put on. So Herb told the makeup team, "keep it simple, put some oil on her." Then we put the baby radishes on my head for the mohawk effect, climbed on the roof, and took the shots. Simple. That was the brilliance of Herb, his pictures were complex and full of depth, but the process was relatively simple." This calendar shoot would be her first of three, the most recent being shot in 2013 by Patrick Demarchelier. 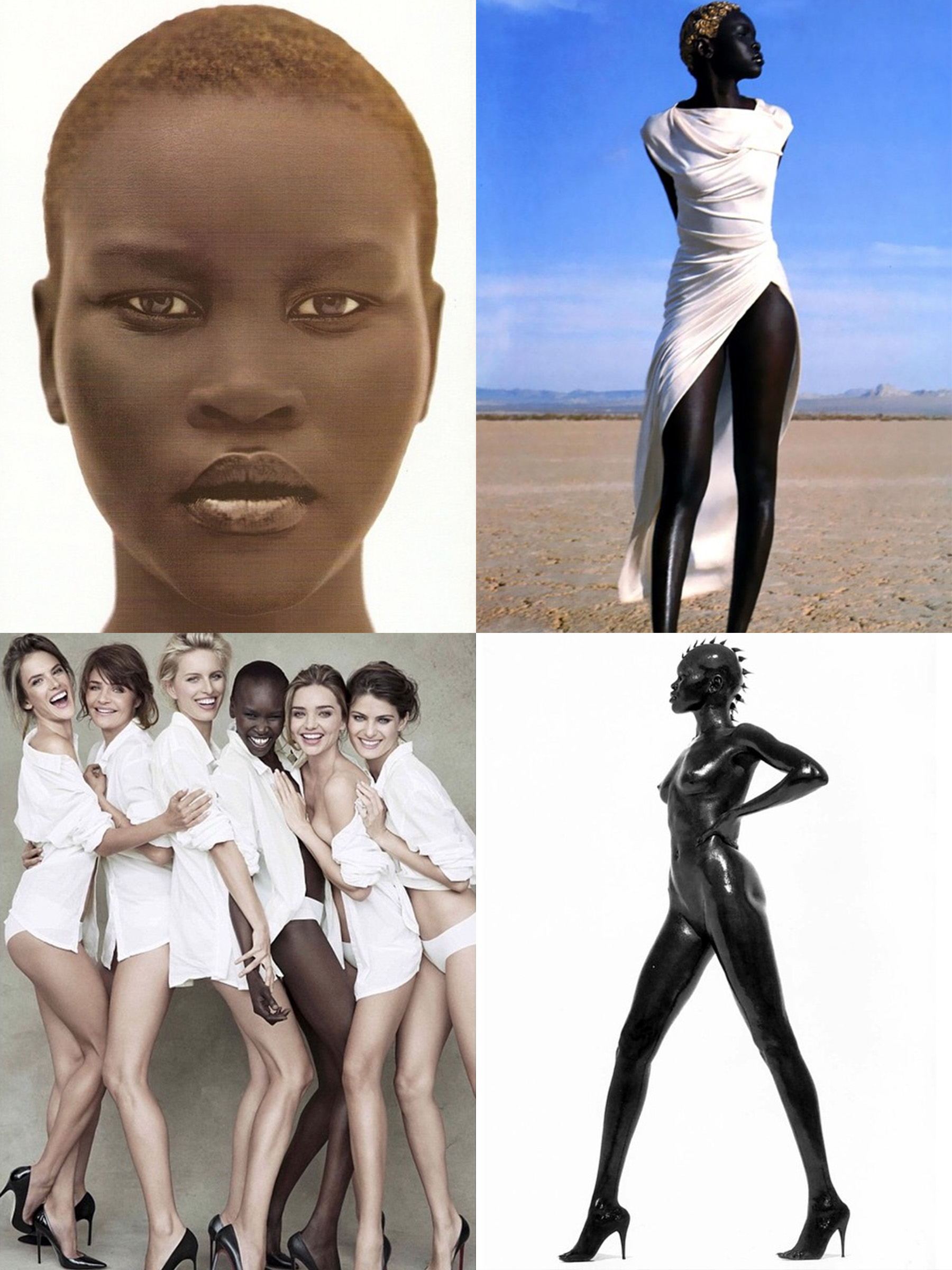 Alek made her VS debut in 2001 wearing oversized wings and lace lingerie in one of the brand's first highly publicized runway shows. Photographer Nick Knight shared, "Alek has this incredible ability to make a Victoria's Secret runway show, something that could easily be looked at as overtly sexual, seem ethereal...it's truly remarkable." In her own words: "I had some huge wings on genre! For me, it's important to show girls that we're all beautiful, to show many versions of what it means to be sexy, and to own their bodies and their sexuality. It's empowering!" Around 2003, Alek took a bit of a break and stopped doing as many shows. However, she made an exception for her friend Karl Lagerfeld to appear as the “bride” at the Chanel couture show. After years of working with all of these incredible artists, Alek was inspired to start designing herself. “I launched my handbag line Wek 1933 (the name is an homage to my late father), and I love painting. After all, I did go to one of the best fashion schools!" 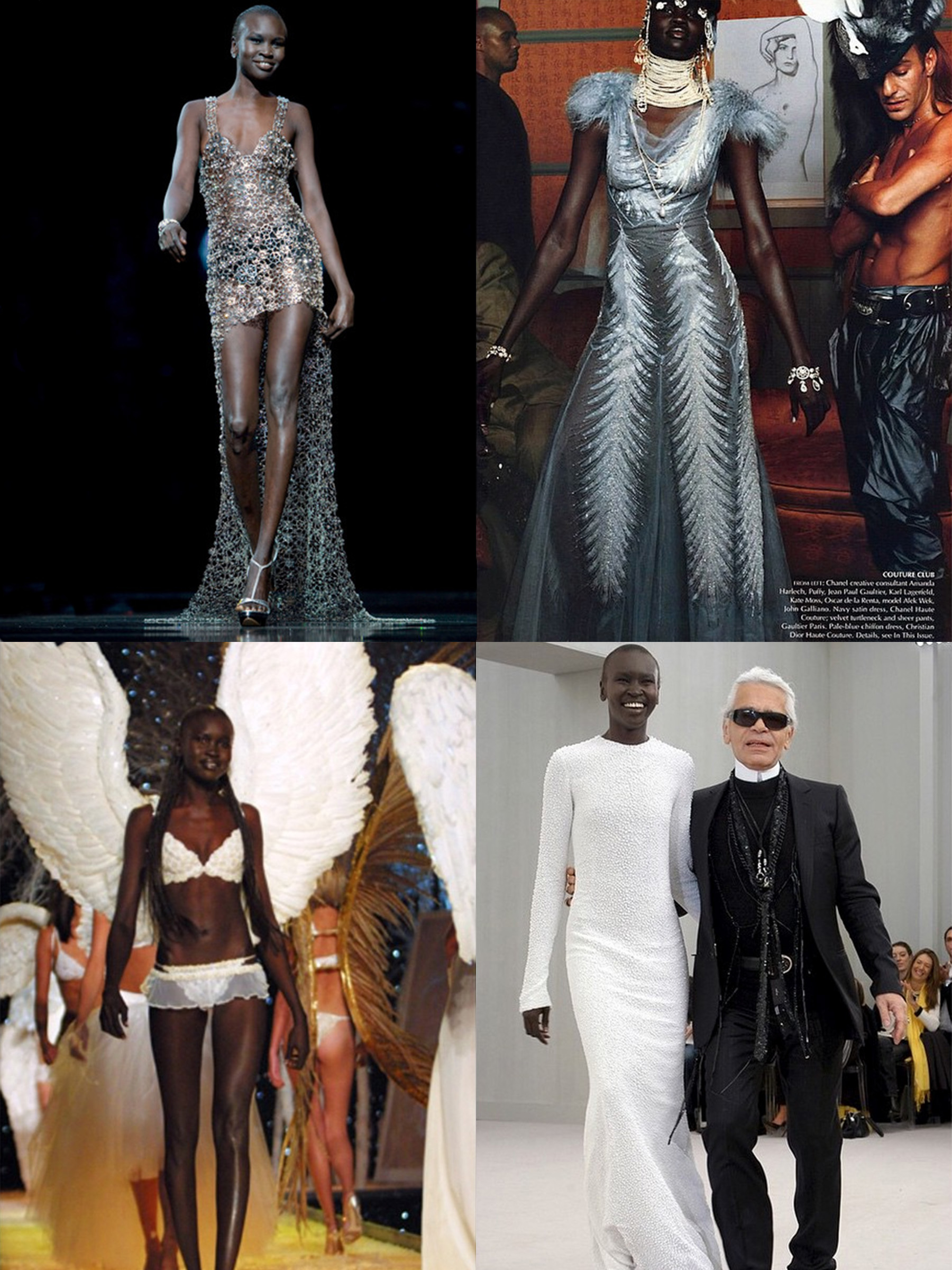 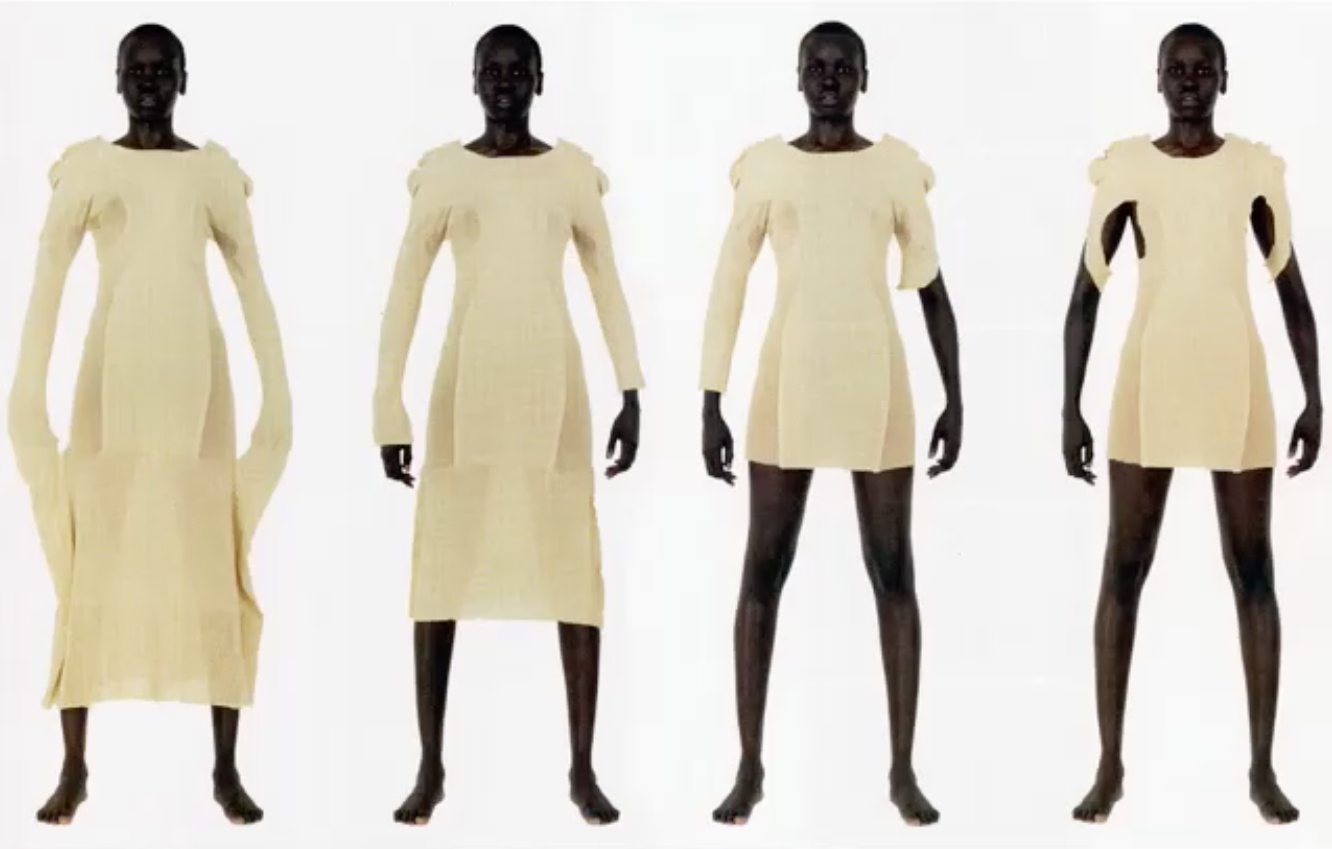 The BBC followed Wek and her mother to her mother’s childhood home in the Sudan as a part of its Africa Lives documentary series in 2005. In the documentary, the family sets out to track down Wek's long-lost aunt after the Comprehensive Peace Agreement ended war in the Sudan. "When I returned to New York, I was so moved by those memories and the many changes that occurred in my life—losing my father in the war, being separated from my family at age twelve for two years, and rising to supermodel superstardom. I wrote my memoir, ALEK: From Sudanese Refugee to International Supermodel [Harper Collins, 2007]. I never imagined it'd become a best-seller, nor that it would be translated into 10 languages, but I'm so happy that my story has resonated with so many people around the world." 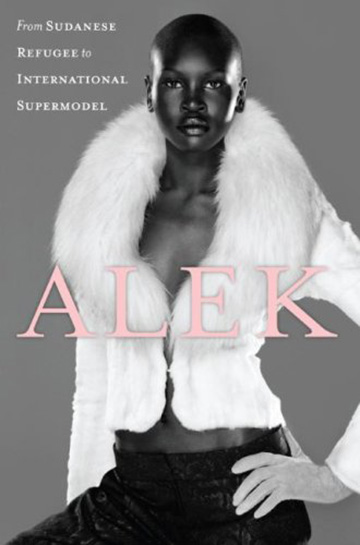 Wek appeared on the inaugural issue of Forbes Life Africa in 2013. As a humanitarian activist in Southern Sudan, Wek currently serves as a Good Will Ambassador to The United Nations High Commission for Refugees. In 2012, she travelled back to her hometown to celebrate the South Sudan Independence Referendum and the first anniversary of her nation’s freedom. She also holds a seat on the advisory board for the United States Committee for Refugees, and speaks at New York City-area schools to raise awareness of famine in Southern Sudan and the importance of nourishment. Wek was also made an official global ambassador for H&M’s Conscious Foundation, and spoke at the Congressional Black Caucus for International and Foreign Affairs as a member of a panel that included Hilary Clinton. Alek Wek has become not only an icon and a supermodel, but also a role model for young women everywhere. 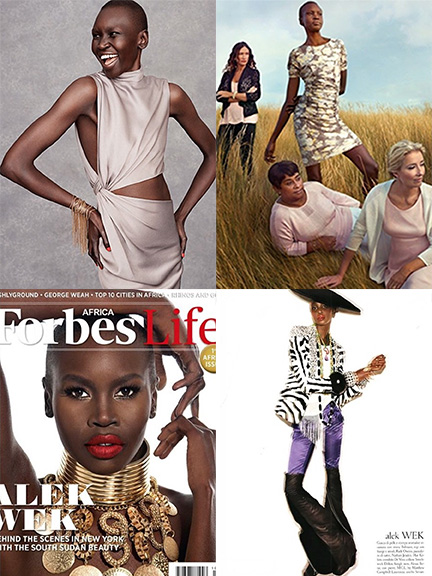